What is Amateur Radio?

Don’t be fooled by the word ‘amateur’ – radio amateurs take great pride in operating their stations to the highest of standards. All radio amateurs in the UK are licenced by the government, and have passed examinations in operating procedures and radio technology to gain their licence. It is hoped that in the future, an amateur radio qualification will be acknowledged as a non-vocational qualification equivalent to an NVQ, a measure of the level of the qualification. 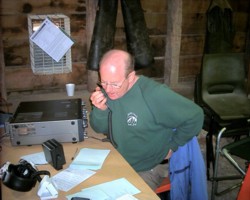 Peter G4EOW operates a demonstration station for the public.

For most amateurs, passing the exam to earn their licence is just the start of a learning process as they seek to advance their skills and become more proficient. Some amateurs study electronic theory to the level at which they can build their own radios: Most have constructed an aerial or two. Radio amateurs can communicate not only by voice, but by pictures (moving and still); morse code (still used with delight by many amateurs) and computer: There are satellites in space dedicated solely to amateur radio, and some radio amateurs communicate by bouncing radio signals off the moon, meteor trails or the aurora borealis. Many US Space Shuttle missions have amateur radio on board, and talk to stations on the ground, and Helen Sharman (Britain’s first astronaut) had a number of amateur radio contacts as part of her space mission.

Of course, you can just chat if you want to!

It’s now much easier to get an amateur radio licence than it used to be: courses are much cheaper, and more accessible, and the examinations are structured in a way that is easier to understand. You still need to know the stuff, though!

Getting an Amateur Radio Licence

There are now three types of licence, and your local amateur radio club probably runs courses: In the South West Hampshire RAYNET-UK Group’s area, the Itchen Valley Amateur Radio Club certainly does, and there may be others.

You start with the Foundation Licence, and courses for this usually last a couple of individual days, or a full weekend. You’ll learn some of the theory about how radio works, although there’s nothing brain-boggling! You’ll also learn the rules of amateur radio operating, and how to operate safely. Having passed the end of course examination, you’ll get a callsign which looks like M6ZZZ (in other words, M6 followed by three letters) and will be able to operate on air, using a restricted range of frequencies and low power.

You can then go on to the Intermediate Licence, with another short course consisting of a few evenings, or a couple of weekends. You’ll learn some more electronic theory and do some practical construction under the guidance of experienced teachers. Having passed the exam, you’ll get a callsign which looks like 2EØZZZ (2EØ + three letters), and have access to more frequencies and methods of operating.

You can then move on to the Full Licence, which may in the future become known as the Advanced Licence. Having taken – and passed – the exam at the end of this course you’ll have everything that this fascinating hobby has to offer, open to you. Your callsign will look like MØZZZ (MØ + three letters).

Of course, you can stop at the Foundation or Intermediate level if you want to!

NOTE: Example callsigns given are for standard English callsigns currently being issued: Slightly different callsigns are issued to amateurs in Scotland, Wales, Northern Ireland, the Isle of Man and the Channel Islands. Older UK callsigns will also look slightly different to the examples given.