The New Forest Marathon is a well established event in Hampshire. It has attracted thousands of competitors and supporters  over its life of almost 40 years and has raised over £1.31 million for local good causes.(click here to visit their website)

The race usually starts and finishes at New Park Showground near Brockenhurst and is run through the tracks of the New Forest National Park. 2020 however was different ! 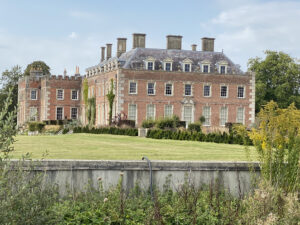 Initially there was concern that the event would need to be cancelled this year due to the COVID pandemic, however after many extra hours of planning by all concerned the event was able to go ahead, although unfortunately not on its ‘home ground’.

The marathon was finally held on the weekend of the 19th and 20th September on the St Giles Estate in Dorset.

This year we had 15 operators providing communications from drinks stations and observation points along the routes, reporting back to our control point in the race village 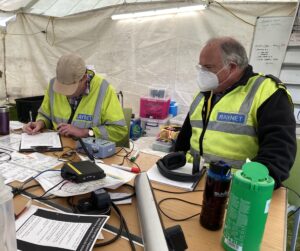 ‘Masked up’ whilst logging in control

In addition to the provision of communications we also provided real time tracking, using GPS, of the lead and tail runners for both the full and half marathon. We did this via a tracking website aprs.fi, whilst this could not give positions of the runners, it did provide an indication of the race progress. 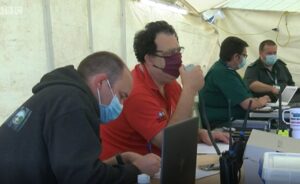 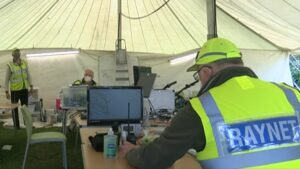 Social distancing in the Control tent

Our Biggest event of the year, this year the marathon (NFDC) took place on 8 September 2019

This is the fifth year that the new organisers have run the event and it’s now organised efficiently with a full and half Marathon, plus 5 and 10k runs along with other events in New Park nr Brockenhurst in The New Forest .

From a Raynet perspective we had many meetings with the organisers along with other key agency responders.. 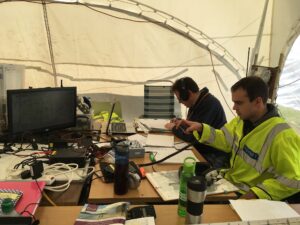 n located at New Park for 5 days before the event and two days after with our group controller resident.  During that time it enabled the infrastructure for the event to be setup and cleared down: – Aerials, Power, Tables etc.  It also allowed testing of equipment.

Being on site was very useful as it ironed out many problems as we were able to talk to and meet organisers. Every day was fully occupied. Raynet VHF PBR radios were loaned to the organisers to enable a smooth setup with more lent on race day – a total of 22.

This year we provided Wi-Fi Internet from our Satellite system by the Registrations tent and also Wi-Fi at the “Start / Finish bridge” using a 5Ghz link across the park. – So that phone calls could be made even if the 4G system was overloaded and unavailable.

On the day, Raynet, a medical representative and HantSar were around a group of tables in the control tent. This enabled us to exchange information and respond to incidents. This was the third year we have done this and it is now well established. Direct live radio APRS for the lead and tail bicycle markers in the Full and Half Marathon provided a display in the control tent and one display was placed in registration tent.

The weather on the day was kind this year.

All radio nets were very busy.

14 Group members took part along with 6 members from adjacent groups for which we thank.